Breast augmentation is one of the most popular plastic surgeries towards mammoplasty. Augmentation mammoplasty is a complete surgical procedure. Breast augmentation surgery is performed under general anesthesia and requires careful preparation of the patient and their stay in the clinic (the length of time depends on the complexity of the surgery and the patient's condition). At present, various methods of breast enlargement using various implants have been developed and successfully practiced. Indications for surgery are primary aplasia (absence of mammary glands), primary hypoplasia (underdevelopment of the mammary glands), involution of the mammary glands, mastectomy (surgical removal of the glands, both completely and partially).

From the history of augmentation mammoplasty

The need for breast augmentation surgery has been determined by diseases that required removal of breast tissue or, in women, resulted in deformation and asymmetry of the mammary glands. The first attempt at breast augmentation was made in 1889. Liquid paraffin was used as a filler (implant) that was injected into the mammary gland. In 1895, the first augmentation operation was performed using the patient's own tissue (in this case a lipoma removed from the patient's thigh). The unsatisfactory results of the operations carried out prompted a further search for alternative materials. Throughout history, doctors have used glass balls, foam, sponges, polyurethane, ivory, and many other materials. The introduction of such materials led to the development of inflammatory processes in the tissues of the mammary glands, infection, tissue necrosis and the rejection of implanted materials.

It was not until the sixties of the last century that silicone implants, which are the prototypes of the breast implants used in modern plastic surgery, were first used in medical practice for breast augmentation. The shell of the first implants let the filler molecules through, which led to the development of aseptic inflammation in patients, and the smooth surface of the implant led to the development of a capsular contracture.

In the 1980s, scientists hypothesized that the silicone breast implants used provoked the development of breast cancer. The Food and Drug Administration (FDA) has conducted numerous studies without confirmation or refutation of this hypothesis. Modern breast implants are completely safe for the health of patients. Thanks to innovative technologies, you can restore the natural relief, shapes and tactile sensations when touching an enlarged breast.

There are two main methods of breast augmentation: surgical and non-surgical practices.

Surgical methods for breast augmentation differ in the type of access to the breast: 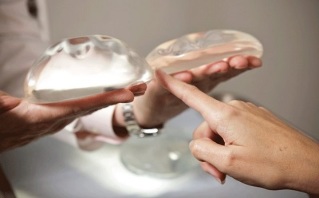 Non-surgical breast augmentation techniques include complexes of exercise, dietary supplements, and hormonal medications (mild breast augmentation is one of the side effects of some drug groups). It should be noted that physical training is ineffective as it affects the chest muscles. The mammary gland itself does not contain any muscle tissue. Dietary supplements and hormonal medications only result in slight temporary breast enlargement.

Modern implants are characterized by their shape (round, teardrop-shaped), surface texture (smooth and ribbed structured) and filling (saline solution, gel, hydrogel). The shape and size of the implants are selected individually based on the natural relief of the patient's breast.

Breast augmentation: feedback on the operation

Before deciding on breast augmentation surgery, the review of which is highly controversial, the patient needs to understand that mammoplasty is a full operation and not a cosmetic procedure that poses certain health risks. In order to avoid the negative consequences of the surgery, patients are encouraged to study the existing methods of breast augmentation and the types of implants available, and to attend the consultations of several plastic surgeons. Breast augmentation, the surveys of which are available in the global network, require considerable experience from a plastic surgeon in this particular direction. A surgeon's mistake can lead to undesirable consequences in the form of asymmetry, variable size, visible scars, as well as the development of capsular contractures, inflammation, implant rejection and damage during surgery.

breast augmentation before and after

Many plastic surgeons offer patients the opportunity to explore the portfolio, which includes a surgeon's work on breast augmentation before and after. This visual demonstration of the results enables patients to evaluate the real possibilities of the surgery. The portfolio shows photos of patients and the results of breast augmentation before and after from different angles. Through computer modeling, the desired proportions can be applied to the real physical image of the patient.